Today Finance, Tomorrow the World — How Blockchain Can Change Society

Bitcoin is the cryptocurrency of the day, its wild swings in value grabbing headlines. But it's the underlying blockchain technology that is poised to change not only business, but how society behaves. 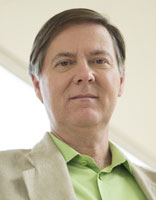 "This is a very straightforward application that could solve a huge number of problems," said Professor Campbell Harvey, a finance professor at Duke University's Fuqua School of Business. "It is a glimpse of the future."

Launched in 2009, Bitcoin is the most public and so far the most secure use of blockchain on a widely used platform. But others are following. There are private blockchain applications already gaining momentum with corporations. And that's before the technology moves beyond finance.

"This technology is not going away," Harvey said. "Bitcoin might go away, but that's just one application of blockchain technology."

For the past three years, Harvey has taught a course called Innovation and Cryptoventures to second-year MBA students at Fuqua. "You want to be the disruptors," he tells his students, "not the 'disruptees'. And blockchain is a disruptive technology."

The disruptees, as Harvey calls them, are the people in the middle of transactions, people that the security and efficiency of blockchain could render obsolete.

"The middle people will be the losers," Harvey said.

For a new technology to be disruptive and successful, it has to solve problems, Harvey said. Blockchain solves the problem of verifying ownership.

"Think about buying a house," Harvey said. "Lawyers must be hired to perform a title search, so you can be sure you are buying the house from someone who truly owns it. Mortgage lenders even insist on you purchasing title insurance because of this uncertainty."

"This is a relic of history," Harvey said. "With blockchain, you could instantly see who owns the land, or house, instantly see the liens, and instantly do the transaction. It's something we should have that we don't have."

A public blockchain is a ledger, much like a spreadsheet. But it's shared - anyone can download a copy, so it doesn't require trust. It can't be edited, only added to.

"If there's a mistake, you can undo it with another transaction," Harvey said. "But you can't change history."

The transactions are lumped into blocks. The last line of each block is also the first line of the next block, which is the chain that prevents tampering. This is enabled by a process called cryptographic hashing.

Hashing creates a fixed sequence of numbers and letters — a hash — for any information. Any time that exact information is entered, it will produce the same hash. Any change in the information will result in a different hash.

The hash for every block in a blockchain is calculated using the hash value from the previous block. This is what makes it secure.

To tamper with a blockchain by correctly guessing a hash would take roughly the same number of guesses as there are atoms in the known universe — and that's for just one block.

"It's just not feasible for anybody to go back and do damage to the history," Harvey said.

The grade in Harvey's cryptoventures course is based 100 percent on students drafting an idea for a business that uses blockchain technology. He said the new ideas just keep coming.
"I thought the projects would repeat the ideas from the year before, but they're all different," Harvey said. "Any time security is important, any time we need to verify ownership of any property, and any time there are people in the middle of a transaction, this peer-to-peer technology has the potential to change the game."

This story was adapted from Harvey's remarks at the Chartered Financial Analyst Institute's 2017 annual conference. Watch video of his presentation here.