What do you do professionally?

I am the founder and CEO of SiNON Therapeutics, a biotech start-up that focuses on targeted drug delivery for neurological diseases. This means getting medicine across the blood brain barrier to treat diseases like brain tumors, Alzheimer’s, Parkinson’s, and more—anything that involves getting medicine to the brain.

What is the most enjoyable part of your job?

I love being in the start-up environment where I get to wear many different hats. There has been an evolution of roles I have had to play, whether within accounting, fundraising, making key hires, employment contracts, business development, and more. You have to learn as you go, such as the fundraising process I had never done before. As I navigate these priorities, I make a list of things we wouldn’t do again, things that worked, and things that we enjoyed about the process. In earliest stages of a start-up, we can’t afford to hire a lot of people that will do the work for us, but I love that combination of wearing different hats and being forced to make it work in those roles, do the research, and forge your own path.

What is the biggest challenge you face?

Reaching the next inflection point to fundraising for our upcoming goal of raising an equity round in the spring of 2021. That may seem far down the road, but we need to start making those connections with investors now. If anyone knows any investors focused on biotech, drug delivery, neurological diseases, or even funding female-owned start-ups, we would love to connect and discuss how they can become involved! Please feel free to contact me on LinkedIn or view the SiNON Therapeutics website (Sinontx.com) to learn more.

What sorts of interesting places has your position taken you? Do you have a favorite?

I was actually a pre-med student, and being in that hospital setting, particularly at the Duke Cancer Center, got me interested in research. During that time, it was difficult for me to see cancer patients, particularly children, experience the struggles and toxic side effects that come with chemotherapy. However, I ended up staying as a volunteer for seven years—even after I graduated—and didn’t end up going to medical school. Today, I still remember the people I met, some of whom have already passed, and the stories they shared with me. Hearing their experiences is what led me to believe there must be a better alternative or a safer way to administer these medications without all the side effects of chemotherapy and without killing the immune system, which causes them to be more susceptible to other diseases. Through my study abroad at IIT in India, I began conducting research and working in a lab. After I returned, my father encouraged me to file a patent for the end result of my research, the Carbon Dot. The patent was issued in 2013, but at that point, I realized that I wouldn’t get far with just a strong technical background. I needed business skills as well, and that’s why I decided to come to Fuqua to get my MBA and merge the technical knowledge with the business side. I eventually started SiNON Therapeutics, and here I am today!

What is the best professional advice you’ve received?

The best advice I’ve ever received is from my dad. I come from a family of girls, and he has always pushed us to be what we want, never give up, and to never take no for an answer. There are cultural barriers that come with being female, younger in the field, or a minority, and people will sometimes try to pull you down and convince you that you can’t do something. You must set your heart in the opposite direction—go out and do the things you aim to achieve. Things will inevitably happen that are out of your control, but the greatest thing you can do is give it your best shot.

Aside from your current role, what is your dream job?

Coincidentally, my mother recently found a list I made when I was younger, which listed the top five professions I hoped to become when I grew up. It’s important to note that from a very young age, I was highly encouraged to become a doctor by my family. However, the number one choice on that list was to be the CEO of a company! Apparently, as a 12-year-old, I knew exactly what I wanted to do. This was highlighted by the fact that at the bottom of the list I had written: “I do not want to be a doctor!” 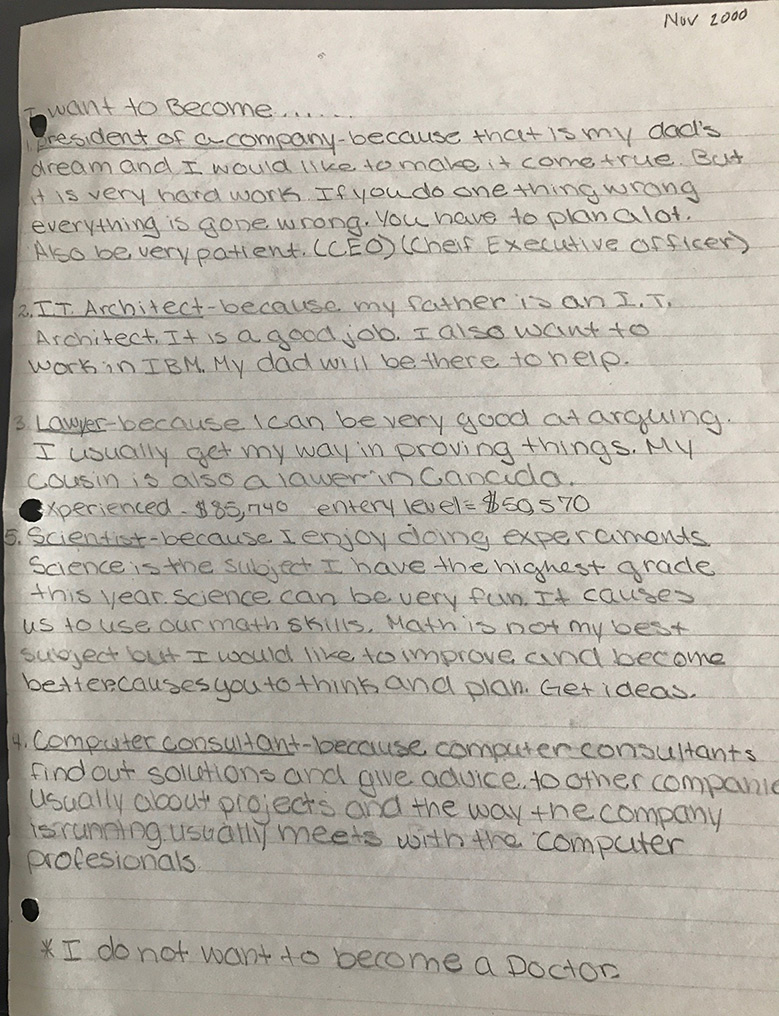 Professionally or personally, what are you excited about right now?

The fact that we just finalized our first external round of fundraising and oversubscribed by almost double the amount we were hoping to raise was very exciting—particularly during the COVID-19 pandemic. Secondly, it was so encouraging to hear thoughts and feedback from friends and family who want to support the mission of SiNON and see us succeed. We were expecting people to make smaller contributions, but many were willing to invest at much higher levels, which validated that people see value in what we’re doing.

What do you like to do outside of work?

I love to bake, particularly when it comes to the decorating part! When I was in college, I made my friend’s cake for her wedding with over 300 guests. Now, I enjoy making things for friends and family. It’s a great activity to de-stress where I don’t have to do much thinking and just operate on creative instinct. 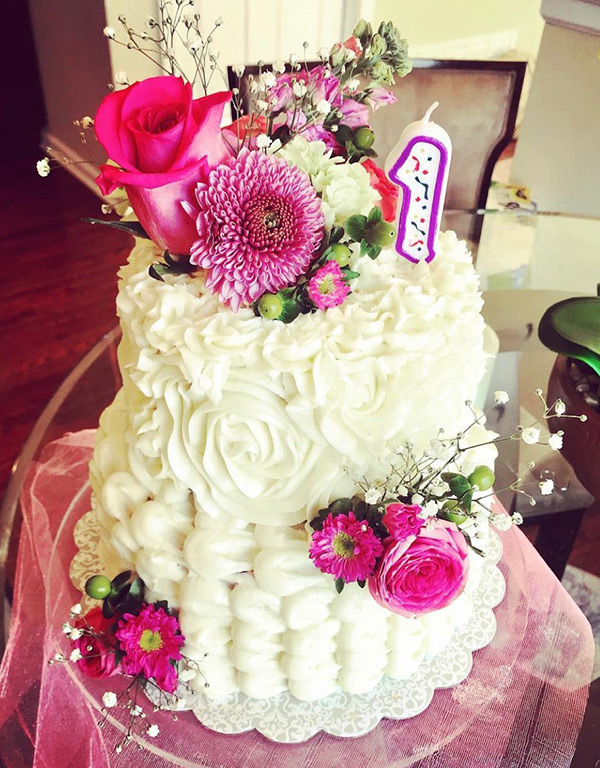 What is the most important thing you learned during your time at Fuqua?

During my time at Fuqua, I really learned the power of networking. Several of my professors became advisors to SiNON, many of whom I still reach out to. You have access to a vast network through your Fuqua connections—not only your immediate classmates, but alumni from all programs and classes. This network becomes more of a family, and even after you graduate, if you reach out to someone they’ll always give you at least twenty minutes of their time. Even if you haven’t spoken with someone in months or years, you can still get on the phone and pick up right where you left off.

Who was your favorite professor?

Jeremy Petranka and David Robinson are my favorite professors. Jeremy is one of those individuals that goes above and beyond in ways you’d never expect from a professor. For example, when I was competing in the Duke Start-Up Challenge, I received an email from someone less than 24 hours before the actual pitch event. That email contained feedback that said I needed to revamp almost every detail about my presentation—everything from the content and colors of my slides to the very name of my company. I forwarded it to Jeremy in a panic, and on his day off, Jeremy spent over an hour on FaceTime helping me rework much of my content. He even helped me come up with the name SiNON! Every time I needed guidance on fundraising, I reached out to David. He always took time from his busy schedule to discuss various options with me and recommend the one which best fit SiNON's current situation. It was he who recommended me to go with SAFE notes. 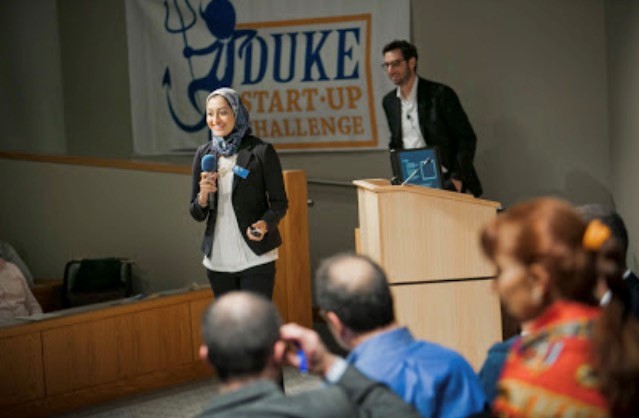 What is your favorite Fuqua memory?

I would have to say my favorite memory is the night I won the Duke Start-Up Challenge. I started off the night in an entirely different mindset than where it ended, as the investor writing the check made it clear they do not invest in biotech. Since I was the only biotech company presenting that night, I assumed I was basically done for. Regardless, I knew how hard I had worked to get to finals, so I wanted to give it my all in case someone in the audience might know an investor interested in biotech that I could connect with. At the end of the night when the investor announced that we won, I was completely caught off-guard and had no idea how to react. What made it incredibly special, though, was that at least half of my classmates showed up that night, and when I won they were all cheering and screaming at the top of their lungs. Later on, Jeremy had written a letter of recommendation for me in which he said that when I won that night, it was like we all had won. To me, that is also reflected in the Team Fuqua mentality where if one of us succeeds, we all succeed. 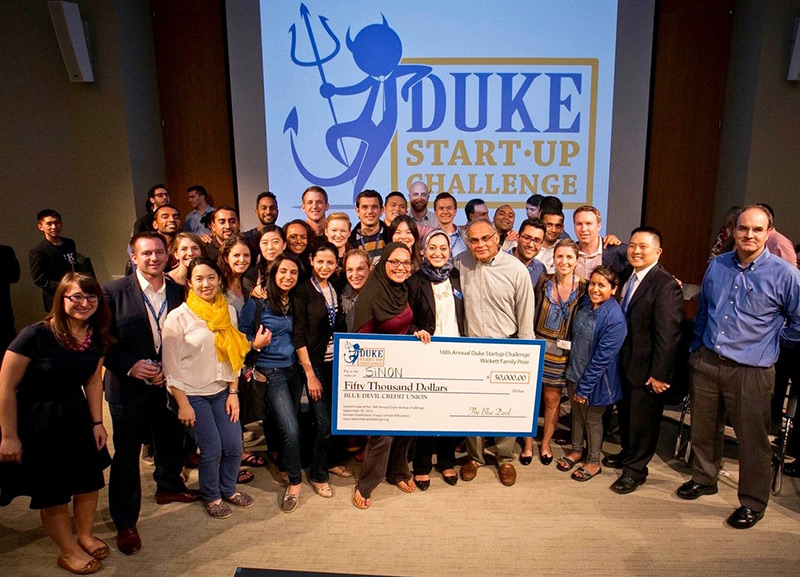 How do you stay engaged with Fuqua?

I participate in a lot of alumni panels for incoming students, which I really enjoy. Also, recently Mary Grey Jacobson reached out to ask if I’d talk to the current Global Executive MBA class as well as on the alumni panel. I also enjoy talking one-on-one to individuals interested in entrepreneurship that are going through the interview process and sharing how I benefitted from my experience at Fuqua.

What does Team Fuqua mean to you?

Team Fuqua is a lifelong friendship and network of support that you build. It’s your second family that you can always reach out to for advice or to simply catch up. I had dinner with some of my Fuqua classmates recently and I hadn’t seen one of them since graduation in 2016. With the way we had a conversation, you would have guessed we were best friends. You almost can’t describe the feeling because it just naturally happens. You form lifelong bonds with your classmates, and they’re always there for anything you need.