What do you do professionally?

I am in my second season as the Vice President of Marketing for D.C. United, a professional soccer team in Major League Soccer. I oversee marketing, branding, advertising, game entertainment, CRM and analytics. I am also an Adjunct Professor at George Washington University where I created a course on Sports Analytics 4 years ago. For the past seven years, I have been an Adjunct Professor at Georgetown University where I teach Sports Digital Marketing. 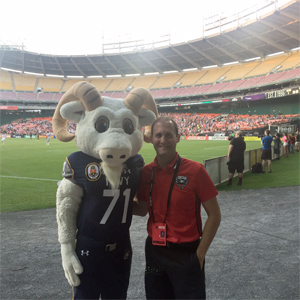 What is the most enjoyable part of your job?

That it is more of a lifestyle than a job. It revolves around a season, and each day I go to a stadium. Arriving each morning and seeing the green grass of the stadium field is a great way to start a day.

What is the biggest challenge you face?

Creating a modern soccer fan experience in a stadium (RFK) that opened in 1961 to house an NFL team and a Major League Baseball team. Without such modern fan amenities as wifi or a large HD video board, we are continually challenged to be extra creative to ensure that the value proposition of attending a D.C. United match is a positive one. Our new stadium is slated to open in 2018, and it will be the first soccer-specific stadium built in the District.

What sorts of interesting places has your position taken you? Do you have a favorite?

Prior to working for D.C. United, I spent six seasons with the Washington Nationals and three years at the NBA League Office. In all three jobs, I was able to see games at many arenas and stadiums that I otherwise would not have seen. It's tough to pick a favorite, but I feel fortunate to have seen the Nationals' first game at Fenway Park, a Seattle Sounders FC match at CenturyLink Field and Seattle Sonics game at Key Arena before the team relocated to Oklahoma City.

What is the best professional advice you've received?

For me, it's been less specific advice and more in the way of opportunities to work with some incredible people that I was easily drawn to emulate as best I could. While at the NBA, I was extremely fortunate to work with Marc Kolin (now at NBC Universal) and Scott O'Neil (now the CEO of the NJ Devils & Philadelphia Sixers).

Aside from your current role, what is your dream job?

To someday run a team or teach at Duke.

What do you like to do outside of work?

I have two young kids, a 3-year-old son and an 8-month-old daughter, so I've mainly been enjoying taking them to Navy sporting events and other activities in Annapolis where we reside.

What is the most important thing you learned during your time at Fuqua?

To take advantage of every learning opportunity that comes along, including creating and editing Fuquavision skits.

Who was your favorite professor?

I would say it's a tie between John Lynch for Marketing and Jennifer Francis for Valuation. They both made learning as enjoyable as possible and something that I strive for in the classes that I now teach.

What is your favorite Fuqua memory?

Hands down—Being a Cameron Crazy during the 2000-01 men's basketball national championship season. Battier-Duhon-Williams-Boozer-Dunleavy—has there been a better line-up in Durham?!

What does Team Fuqua mean to you?

That your commitment to and appreciation of your classmates doesn't end at graduation. Some of my best friends were made during those two years. I met my wife a classmate's wedding.