In this holiday season we often gather with family—individuals with whom we may have plenty or very little in common. Sometimes, though, you get lucky and your biological family is also your Fuqua family. Despite there being 18 years between when father-daughter pair Chris Gammon MBA '97 and Sydnor Gammon MBA '15 attended Fuqua, it brought them closer together than ever.

After Sydnor Gammon watched her father, Chris Gammon, navigate the financial crisis of 2008, Chris didn’t know how she would view the business world. However, eighteen years after he shook the hand of former Fuqua dean Rex Adams and accepted his MBA, Chris watched Sydnor traverse the graduation stage and accept her degree from current dean Bill Boulding. Though their alikeness seemed to continue in their careers—Chris is now a consultant at Carolinas Investment Consulting LLC and Sydnor is a manager in Deloitte Consulting’s health care strategy practice—their journeys through Fuqua were distinct.

“I chose the Weekend Executive MBA program because Ruth and I had Sydnor and her little sister, Betsy (now a med student),” Chris said. “I needed to keep working!” His decision to attend Fuqua came from an openness to change and adapt. “My 15-year near-vertical career path in commercial banking suddenly felt as though it was levelling off,” he said. “I happened across three references to the Fuqua Weekend Executive MBA program in a short time and it seemed divinely inspired!”

Sydnor chose a different path through Fuqua. “I was passionate about health care from a young age,” she said, “but spent several college internships determining what about health care excited me most. I went to Davidson College where—in true liberal arts fashion—I couldn’t fathom a semester without taking English or Spanish classes.” These became her major and minor, respectively, but she sustained an interest in health care throughout.

“I didn’t contemplate an MBA until after college. I worked with a few MBAs in health care administration at Emory Healthcare (landing my first job thanks to Davidson alumni who took gambles on an English major) and began to understand what an MBA can offer professionally,” Sydnor said. “I realized I would need a solid grounding in business fundamentals to keep career doors open, and that an MBA with a focus in health care would be the right balance.”

Even though she grew up knowing and having great respect for the Fuqua MBA program from her dad’s experience, when Sydnor started to look at business schools she was first drawn to Fuqua for the strength of the Health Sector Management program. “Blue Devil Weekend was when I really learned the meaning of Team Fuqua and how great a fit Fuqua would be more for me, personally and professionally.”

“Sydnor has phenomenal instincts about such things and makes brilliant decisions. I think she picked up on how excellent and transformational the time and the degree was for my career and me,” Chris said. “She was so smart to choose the Daytime MBA with a certificate in Health Sector Management over a dual-degree MBA/MHA.” 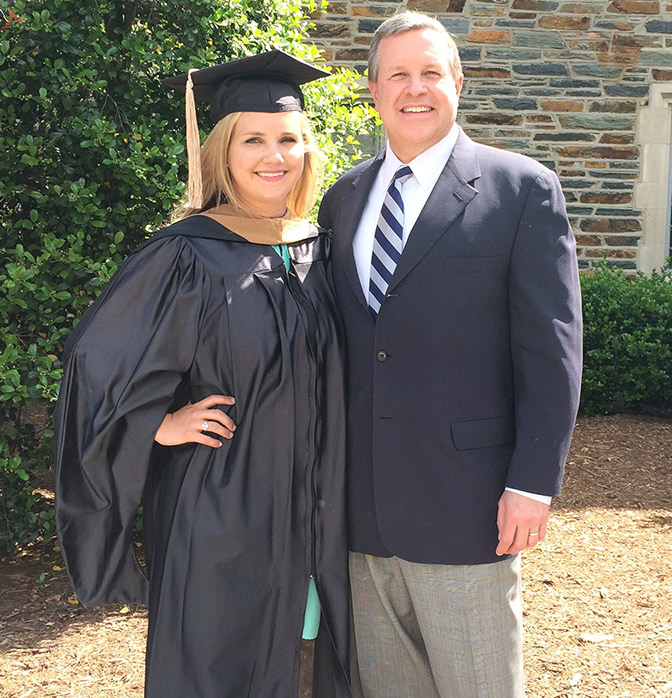 The biggest difference in their experiences was the natural fullness of the Daytime program that Sydnor positively immersed herself in. “The Weekend Executive MBA program is by definition more drive-by, more transactional. The beauty of the Duke University MBA is the degree you earn,” Chris said.

For advice on attending Fuqua, Chris gave his daughter the same wisdom he had given himself about 18 years prior: “If you’re going to go get an MBA, you should go for the biggest, baddest program that meets your ambitions. For each of us, there was only one clear choice: Fuqua.”

Before Fuqua, Sydnor and Chris already shared much in common: Both graduated with liberal arts majors from southern colleges—Chris from Washington & Lee and Sydnor from Davidson. “I became a Duke basketball fan through my Fuqua MBA experience, so by proxy Sydnor grew up as a Duke basketball fan as well,” Chris said. Sydnor did graduate student campout both years for access to season tickets and was even on campus for the 2015 National Championship. They also share a love of good bourbon and spent Father’s Day 2018 together on the Bourbon Trail in Kentucky.

Whether following Fuqua on social media or attending alumni events, Chris and Sydnor still keep in great touch with the school and fellow alumni. “My classmate, John Webster, does an outstanding job polling us for alumni news,” Chris said. “While at Fuqua recently for the Finance Practitioners Summit, Kelvin Jones, Jon Albright, and I re-connected. Thankfully, Keith Pekau and Michael Pfaff travel through Charlotte and see Bill Elmore, Kevin McCarthy, Ted Noneman and me. Dean Boulding also came through Charlotte a few months back and connected us right back with the school so well it felt we never left.”

Sydnor primarily stays connected to Fuqua through Deloitte by leading the company’s recruiting efforts at Fuqua and its relationship with Duke University. “I regularly come to campus to meet with students, faculty, and staff. I happily accept any opportunity to get back to Durham! Traveling for work has meant I’ve been able to catch up in person with Fuqua classmates over the last three years in exotic locales across U.S. like Louisville, Kansas City, Houston, and Seattle!”

For the Gammons, supporting the Fuqua Annual fund is about giving back and paying forward. “For me, the degree itself qualified me to move from commercial banking into investment banking. The fresh content then energized me to earn my CFA and then my CFP, and the loyal, devoted alumni network helped me migrate into and excel in private wealth management,” Chris said. “My Team Fuqua mates formed a singular inflection point in my career and life, and I certainly want to support Fuqua every year in response. When Wachovia went under in 2008, we lost our charitable giving currency. The least I can offer Fuqua is my participation. I’m a big believer in annual giving.”

“The most important life skill is relationship-building with others—as a leader, teammate, advisor, or friend. Business creates good in the world, but at the heart of successful businesses are strong relationships,” Sydnor said. “I want to ensure that future Fuquans have the same (or better!) experiences that I did. My two years at Fuqua were two of my best, and I want to make that accessible, rewarding, and impactful for those who follow.”

Though one could initially suspect the differences in their chosen programs combined with almost two decades between their graduation dates could cause somewhat of a disconnect, it couldn’t be further from the truth—and not just because of their mutual heartbreak over Durham restaurant Satisfaction’s closing. “The pizza, beer, and basketball viewing were equally popular in both 1997 and 2015!” Sydnor said. “Attending Fuqua has made us closer. Even though our Fuqua experiences were so different, it has been fun to share Duke in common.”

“Absolutely!” Chris agreed. “It’s fun to meet each other’s close friends and bring each other Fuqua swag from Durham!” You won’t find any estranging inside jokes or competitiveness over attending the same business school. “Quite the opposite,” Chris said. “Hey, we’re the GamFam. We’re all about encouraging others.”

Are there any other Duke graduates in the family? Well, the Gammons certainly seem to be more inclined towards a darker shade of blue. In their words: “We have a number of Duke degrees in our family...and hardly any Carolina. We’d like to keep it that way!”